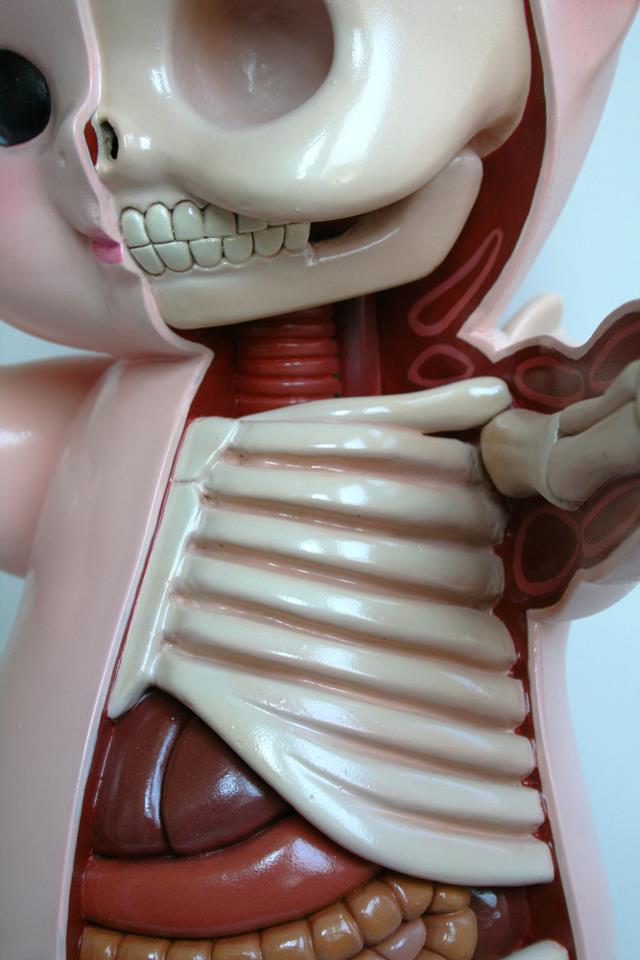 See more images of this amazingly detailed anatomical sculpture, amongst many others at Jason's website moist production.com

The death of a child or infant in suspicious circumstances is one type of case that has the potential for being particularly contentious for forensic pathologists, and the evidence base upon which opinions are based is weak in certain instances, not least those involving alleged 'shaken baby syndrome' or 'short distance falls'.

The Goudge Inquiry into paediatric forensic pathology services in Ontario, Canada demonstrates how 'bad things can get'. Aspiring forensic pathologists are recommended to visit the website for this Inquiry, which provides a unique insight into current thinking on the contentious issues, with transcripts of witnesses called to give evidence at the Inquiry, as well as some extremely interesting documents prepared by forensic pathology and legal experts for the Inquiry.

All authors highlight the lack of 'evidence-based forensic pathology', particularly in those areas of paediatric practice that are commonly in dispute at trial. The Welsh Child Protection Systematic Review Group is attempting to address this need, and have performed systematic reviews of the literature for abusive bruising, fractures, burns and oral injuries/bites, as well as currently finalising a review of non-accidental head injury, and undertaking a review of retinal haemorrhages. It remains to be seen whether such evidence makes its way into expert opinions and court proceedings.

Of all the questioned forensic theories and practices, this is the one I would put at the top of the list for the threshold examination. Of all the currently questioned practices, this is the only one asserted by a respectable minority of specialists to be completely invalid. While a vitreolic dispute continues between the pro and con groups, defendents continue to be sentenced to exceedingly long prison terms based on the theory. While the thoery's supporters accuse the doubters of profiting from defending baby-killers, the doubters label the supporters as zealots lacking any knowledge of physics or of the scientific method. It is long past time that an authoritative body outside the adversarial system examined the underpinnings of the theory and published its results.

Injuries that should raise concerns

forensic medicine and pathology of the vulnerable patient on Pinterest

‘Whilst it is now commonly accepted that the triad is strong prima facie evidence of shaking, that depends upon the common acceptance of experts in the field and not upon the conclusion of courts which are only able to weigh the evidence presented before them. Previous legal authority cannot determine whether the conclusion of a medical report should be accepted or rejected. The most legal authority can do is present an accurate record of what was or was not accepted or propounded.’ (6)

‘We stress this problem because we feared that the medical profession may have looked to the courts to resolve medical controversy.’ (7)

‘…we must emphasise that this judgment constitutes legal, not medical, authority and neither adds to nor subtracts from the strength of the evidence afforded by the triad.’ (7)

‘A just resolution of the three trials to which these appeals relate depends upon the judge ensuring, so far as possible, that they proceed on what Judge LJ described as a logically justifiable basis (Kai-Whitewind [90]).’ (200)

‘Justice in such cases depends upon proper advanced preparation and control of the evidence from the outset at the stage of investigation and thereafter.’ (201)

‘In Kai-Whitewind Judge LJ rejected the contention that where there is a conflict of opinion between reputable experts, expert evidence called by the Crown is automatically neutralised [84]. He emphasised that it was for the jury to evaluate the expert evidence even where the experts disagree as to the existence of the symptoms upon which their opinions were based [88-89]. But how is a jury to approach conflicting expert evidence? We suggest that it can only do so if that evidence is properly marshalled and controlled before it is presented to the jury.’ (203)

‘The process of narrowing the real medical issues is also vital in relation to another important function of the judge in advance of the trial. He should be in a position to identify whether the expert evidence which either side wishes to adduce is admissible.’ (206)

‘The Kennedy report cautions against doctors using the courtroom to ‘fly their personal kites or push a theory from the far end of the medical spectrum’. It recommends a checklist of matters to be established by the trial judge before expert evidence is admitted, including:

‘We emphasise the third …. Their continuing observation, their experience of both the forseen and unforeseen, the recognised and unrecognised, form a powerful basis for their opinion.’ (208)

‘A logically justifiable conclusion depends on the structure and quality of the directions in summing up given by the judge.’ (213)

‘The essential medical issues which the jury have to resolve should be clear by the time the trial starts.’ (214)

‘By the time the judge comes to sum up the case to the jury the issues and the evidence relevant to the issues should be understood by everyone, including the jury.’ (215)

‘There are two features of the content of a summing-up in cases such as these which, we suggest, are important. First, a realistic possibility of an unknown cause must not be overlooked. (217) Second, the jury need directions as to how they should approach conflicting expert evidence. … a jury needs to be directed as to the pointers to reliable evidence and the basis for distinguishing that which may be relied upon and that which should be rejected. (218)’

‘(But judges, we suggest), need to remember that their directions are part of the means by which they ensure that a case which depends on expert evidence proceeds to its conclusion on a logically justifiable basis’ (221) 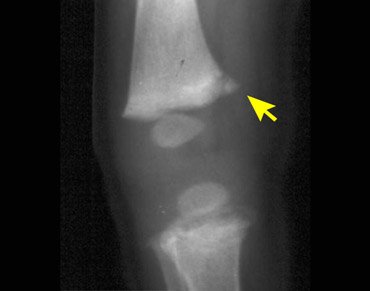 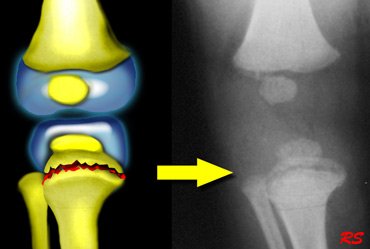 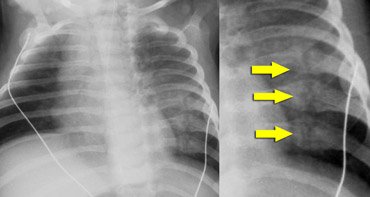 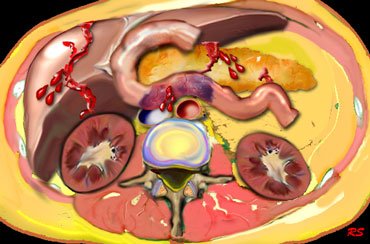 illustration of traumatic abdominal injuries seen in non-accidental/ inflicted trauma (but not necessarily specific for such) - liver laceration, duodenal injury (?compression against the vertebral column), and pancreatic injury 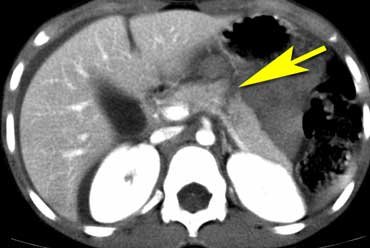 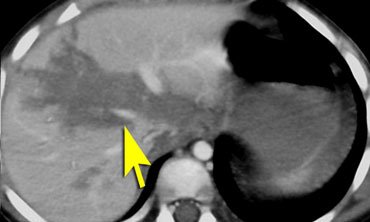 Radiological assessment plays a major role in the detection, and diagnosis, of non-accidental injuries in children.

Read more about this topic at the excellent Radiology Assistant article (by Simon Robben). All of the above images come from this article.

Not all fractures are caused by non-accidental trauma - some may be caused by 'trivial trauma' on a background of natural disease ... 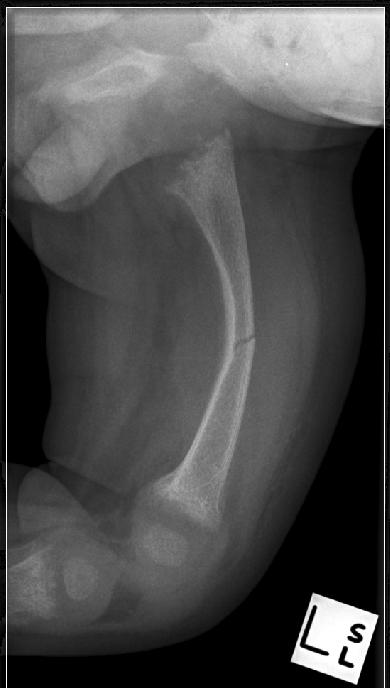 This xray of a left femur shows bowing, an incomplete fracture, cupping and fraying of metaphyses, delay in ossification of the femoral capital epiphysis, and widening of the physes, findings typical of rickets.

on the effects of simple parenting advice ...

It's a chilling thought that when we think we are doing good, we may actually be doing harm, but it is one we must always be alive to, even in the most innocuous situations. The paediatrician Dr Benjamin Spock wrote a record-breaking best-seller called Baby and Child Care, first published in 1946, which was hugely influential and largely sensible. In it, he confidently recommended that babies should sleep on their tummies. Dr Spock had little to go on, but we now know that this advice is wrong, and the apparently trivial suggestion contained in his book, which was so widely read and followed, has led to thousands, and perhaps even tens of thousands, of avoidable cot deaths. The more people are listening to you, the greater the effects of a small error can be. I find this simple anecdote deeply disturbing. 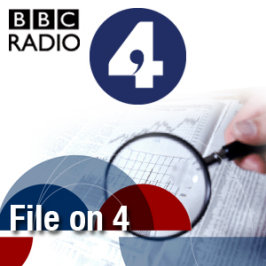