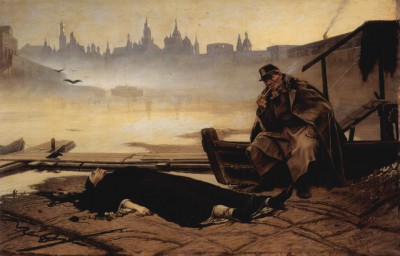 Not every individual, whose body is recovered from water, has drowned.

When a body is recovered from water, the significant issues raised are frequently:

Estimation of post mortem interval in water is unreliable (Giertsen 2000), but temperature is likely to be the most important factor governing decompositional changes.

As a matter of interest, research into the process(es) underlying wrinkling of the skin of the fingers following immersion in water in life have hypothesised that water permeates sweat ducts and alters the electrolyte composition, following which autonomic nerve fibres in the digits are triggered. These mediate vasoconstriction, resulting in negative digit pulp pressure (Wilder-Smith and Chow 2002 and 2003).

The epidermis of the digit skin is firmly anchored to the deep dermis via epidermal ridges, which insert every 1mm along longitudinal lines, and this anchoring - which allows us to firmly gripo objects - results in variations in skin tautness (maximal at anchorage sites). Resistance blood vessels in digits are distributed in an inhomogenous manner; large numbers of 'glomus organs/ bodies' are present, which lose volume through vasoconstriction and help create negative digit pulp pressure. A pressure gradient between deep and superficial structures induces a downward pull on the overlying skin. This downward pull is uneven, and leads to the wrinkling seen following immersion.

Little by little he distinguished the bodies, and went from one to the
other. It was only the drowned that interested him. When several human
forms were there, swollen and blued by the water, he looked at them
eagerly, seeking to recognise Camille. Frequently, the flesh on the
faces had gone away by strips, the bones had burst through the mellow
skins, the visages were like lumps of boned, boiled beef. Laurent
hesitated; he looked at the corpses, endeavouring to discover the lean
body of his victim. But all the drowned were stout. He saw enormous
stomachs, puffy thighs, and strong round arms. He did not know what to
do. He stood there shuddering before those greenish-looking rags, which
seemed like mocking him, with their horrible wrinkles. 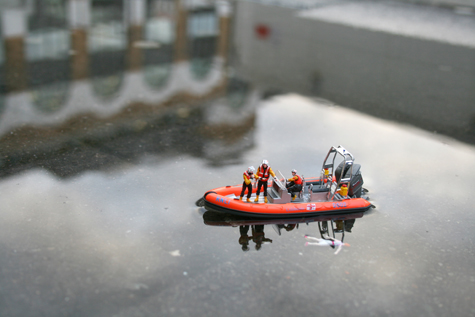 After the storm (Slinkachu via the Telegraph)

(a) Evidence of drowning

Regardless of the composition of water/ fluid, ‘drowning’ (the ‘process of experiencing respiratory impairment from submersion in a liquid’ (van Beeck et al 2005)), may result in pulmonary surfactant insufficiency/ damage, pulmonary oedema, alveolitis, hypoxaemia, and metabolic acidosis (Modell 1993, Pearn 1985, Orlowski 1987).

Extensive experimental (animal) and clinical (human) data exist in the scientific literature, identifying differences between, for example, fresh water and seawater drowning; active respiration of fresh water results in alveolar collapse/ atelectasis, due to the alteration of the surface tension properties of pulmonary surfactant, resulting in intra-pulmonary shunts. Because it is hypotonic with respect to plasma, fresh water is rapidly absorbed into the bloodstream, causing transient (but clinically irrelevant) electrolyte dilution and hypervolaemia. Sea water causes surfactant loss, and because it is hypertonic with respect to plasma, results in fluid shifts into alveoli, plasma electrolyte hyperconcentration and hypovolaemia. (Modell 1993, Pearn 1985, Modell and Davis 1969, Modell et al 1966).

Experimental evidence (Modell and Moya 1966, Modell et al 1967) shows that there is an inverse relationship between survival and the volume of aspirated fluid (sea water being twice as lethal as fresh water), but even small quantities (i.e. as little as 30 mL) caused arterial hypoxaemia.

Autopsy findings ascribed to drowning (‘external’ foam (i.e. visible at the mouth or nostrils), frothy fluid in the airways and lung ‘hyper-expansion’ reflect the pathophysiology of submersion and aspiration of the drowning medium; none of these, however, is diagnostic of drowning or present in all ‘verified’ drownings. (Lunetta and Modell 2005, Saukko and Knight (2004), Modell et al 1999).

Suggested ‘signs of drowning’ reported in the literature include;

(i) External foam/ froth and frothy fluid in the airways reflects an admixture of bronchial secretion/ mucus, proteinacious material and pulmonary surfactant with the aspirated liquid (Lunetta et al 2002), which may persist for several days after death, and has been described as being ‘different in quality’ – more tenacious and persistent - from pulmonary oedema produced by other conditions (including cardiac failure, for example)(Modell et al 1999). Frothy secretions may be ‘washed away’ by flowing water during the submersion or recovery period, or may be absent due to the length of time spent immersed.

(ii) ‘Emphysema aquosum’ is the term used to describe hyperexpanded and ‘waterlogged’ lungs, whose medial margins ‘meet in the midline’, and which do not collapse on removal from the body. There may be ‘rib imprints’ on their pleural surfaces, and copious frothy fluid may exude from their cut surfaces (Giertsen 2000, Saukko and Knight 2004). See Magdeburg University's Virtual Pathology website for a 'pot specimen' of emphysema aquosum whichwhich can be rotated using your mouse wheel.

Combined lung weight of over 1Kg are comparable with ‘normal’ lung weights (de la Grandmaison et al 2001), but overlapping with that seen in fresh water drownings in Copeland’s series (Copeland 1985). However, Lunetta et al (2002) argue that lung weight alone is of ‘limited value’ for the diagnosis of drowning.

(iv) Sub-pleural haemorrhages (‘Paultauf’s spots’). These probably reflect haemolysis within intra-alveolar haemorrhages, and have been described in 5-60% of drownings (Lunetta and Modell 2005).

(v) Additional (morphological) ‘signs’ of drowning - ‘middle ear congestion and haemorrhage’, bloody/watery fluid in the sinuses and engorgement of solid organs, including the liver, reduction in the weight of the spleen, and muscular haemorrhages in the neck and back, are non-specific (Lunetta and Modell 2005).

(vi) Microscopy (particularly of the lungs) in the diagnosis of drowning has been described as yielding ‘nothing conclusive’(Giertsen 2000) and is ‘unreliable’ (Saukko and Knight 2004); there may be distension and/ or rupture of alveolar walls, alveolar haemorrhage and ‘narrowing of pulmonary capillaries’ (Lunetta and Modell 2005).

(vii) Diatom testing. Samples of major organs, and bone marrow, are often retained for diatom testing (eg. Kidney, liver, brain). The utility of such testing is ‘controversial’ (Peabody 1980); diatoms have been said to be ubiquitous in food and the environment, in non-drowning deaths, and absent in ‘known cases of drowning’. (Saukko and Knight 2004, Hendy 1973, Foged 1983).

(viii) Blood chloride content/ specific gravity analysis is considered to be ‘of no practical utility for the diagnosis (of drowning)’ (Lunetta and Modell 2005); analysis of blood strontium (Azaparren et al 1998) has also been suggested as a means with which drowning may be diagnosed. 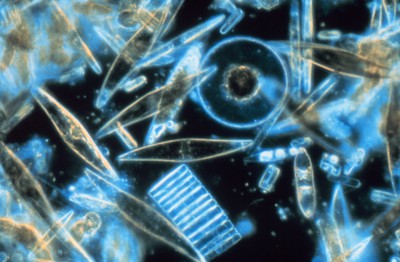 Diatoms under the microscope

(b) Evidence of an alternative mechanism(s)?

Drowning without evidence of liquid aspiration (‘dry drowning’) has been reported in up to 15% of cases, although in a series of 578 adults presumed to have drowned (Lunetta et al 2004), only 1.4% had lungs of ‘normal weight’ and no macroscopic signs of over-inflation.

Rather than represent true ‘drowning’, these deaths may be due to an alternative mechanism such as trauma, the effects of intoxication, arrhythmia, laryngospasm, or some other neurologically mediated mechanism (Modell et al 1999, Saukko and Knight 2004).

Stimulation of trigeminal nerve receptors by immersing the face (and laryngeal/ pharyngeal mucosa) in water has been shown to elicit reflex apnoea, bradycardia and peripheral vasoconstriction in humans- the so-called ‘diving response’ (Suzuki 1996, De Burgh Daly et al 1979), which is augmented by anxiety/ fear (Wolf 1966), a water temperature of less than 20 ºC (Pearn 1985) and, possibly, alcohol (Pearn 1984), increasing the likelihood of the development of a fatal arrhythmia. Cardiac arrest has also been documented following entry of water into the nose (Datta and Tipton 2006).

immersion in water and art

why was the deceased in the water, and why could they not get out? 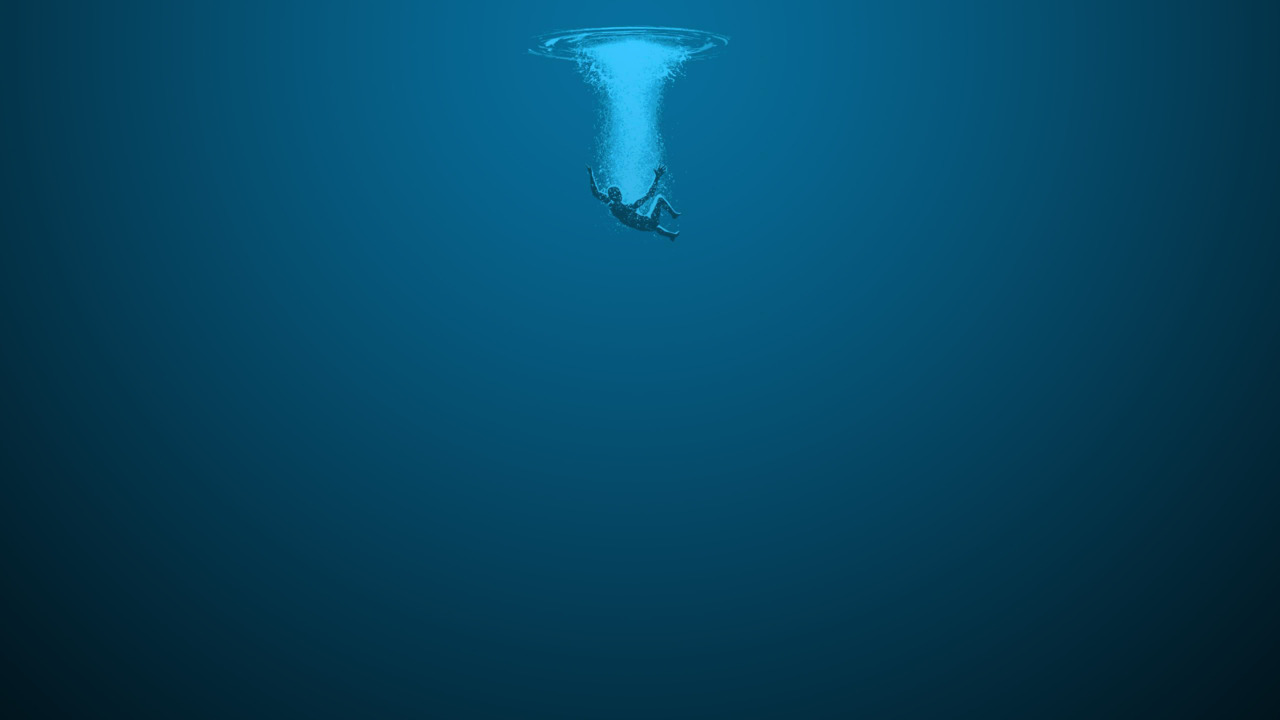 'Sinking feeling that I know all too well', Haley Kate via Tumblr

Despite evidence that alcohol is frequently found in the blood of adult drowning victims (Howland and Hingson 1988, Quan and Cummings 2003, Wintermute et al 1990), a causative role between alcohol and drowning has not been proven.

Lunetta et al (2004) found that the strongest association between drowning and alcohol was in relation to ‘fall-related’ cases (82.8%), and it is possible that an individual, whose body is recovered from water, came to be in the water because of an accidental fall due to alcohol intoxication. It is also an individual may have suffered a fatal alcohol-related concussive head injury, for example (Milovanovic and Di Maio 1999, Ramsay and Shkrum 1995).

Suicide by drowning is rare (and not usually associated with alcohol intoxication); reports in the literature estimate 4.5% (Copeland 1987) to 8.9% (Avis 1993) of all suicides.

Had the deceased any history of cardiovascular disease, or seizure disorder, capable of providing an explanation for falling into a body of water, or for their inability to get out of the water, following an arrhythmia/ seizure?

The ‘vast majority of homicidal drownings’ involve forms of violence such as ‘beating’ and stabbing etc (Lunetta and Modell 2005). Careful evaluation of any injuries present is required in order to determine whether any could have been caused by assault during life. Injuries to the facial skeleton, neck (including larynx) or ulnar borders of the arms (suggestive of ‘defensive’ injuries), for example, should be excluded. It is not always possible, due to the effects of immersion, confidently to determine whether all or some of the injuries present are ante/ peri or post mortem in origin. Marine animals/ fish may cause skin, soft tissue or skeletal damage that may sometimes cause interpretation difficulties (Rutty 2001), and injuries caused by contact between the body and submerged objects, structures, rocks, gravel etc are frequently seen. In some bodies of water, damage may be caused by propeller blades, resulting in severe ‘chopping injuries’ and amputations. 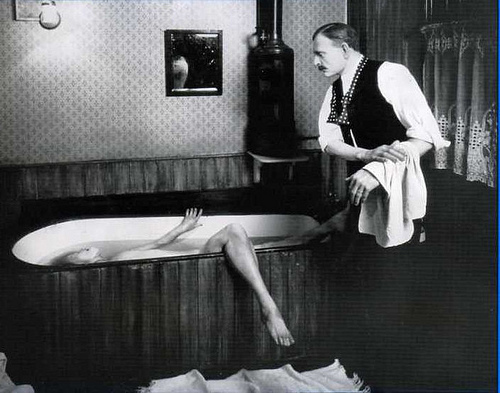 Homicidal 'death in the bath-tub'

cause/ manner of death

‘Classical’ anatomical signs of drowning are frequently absent, and this may be a reflection of post mortem interval; their absence does not exclude the diagnosis.

On the pathological/ toxicological findings alone, it is not always possible to be certain about the most likely cause of death in the case of a body recovered from water. A ‘diagnosis’ of drowning may be possible, but in some cases where a range of possibilities exist, it may be considered appropriate (Davison and Leadbeatter 1996) to give the medical cause of death as; 1a Indeterminate.

The manner of death is frequently accidental, but suicidal drowning has been described (Copeland 1987, Avis 1993), and disposal of bodies in water is well recognised following homicide (Copeland 1986).

'Brides in the bath' murders 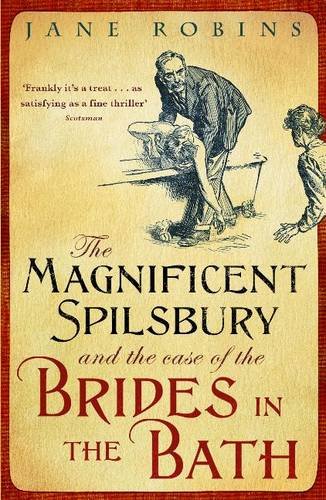 Read the Notable Trials series text on the trial of George Joseph Smith, the Brides in the Bath murderer, here ...

Buy the new book on the case here ...