Following irreversible cardiac arrest, death occurs and cellular metabolic activity ceases (albeit at varying rates). Biochemically recognisable changes occur, and cellular metabolic pathways convert to autolytic activity, resulting in cellular breakdown. Shortly after death, the consequences of such cellular death can be detected, eventually leading to structural changes in tissues and the appearance of decomposition.

Doctors should be able to recognise the consequences of cellular death and decomposition for two reasons:

The appearance of the body after death can conveniently be grouped into two 'phases' (although it should be recognised that such changes represent a continuum, rather than distinct stages that can easily be distinguished from one another); those changes occurring immediately, or in the early post mortem interval, and those changes occurring at a later stage.

These reflect ongoing cellular breakdown, and the effects of bacterial/ microbial breakdown, as well as the effect of the environment in which the body lies (eg a chilled body store, a room in a house, the water or buried in soil etc). Decomposition/ putrefaction, mummification and skeletalisation will be described in more detail below.

Cessation of circulation and loss of muscle tone after death allows blood within vessels to 'settle under gravity', producing a pink/ purple colour in those areas of the body that are lowest, or 'dependent'. In a body lying on its back, the back of the body show hypostatic discolouration, save for those areas compressed by direct contact with a firm surface, such as the buttocks and shoulder blade regions, for example.

The forensic significance of hypostasis is overstated in many textbooks, and was historically used as a means of providing a timetable for the post mortem interval. Modern forensic pathology aims to be evidence-based, and to provide cautious opinions regarding such phenomena, which are so heavily influenced by factors which may not be capable of adequate investigation, such as the temperature of the microenvironment in which the body lies.

Hypostasis may never actually appear (for instance in infants, the elderly, or those who were clinically anemic in life), and Fechner et al (1984) found that there was no linear relationship between the time at which no further movement of blood under gravity could occur (and the hypostatis was described as being 'fixed') and the time since death. Suzutani et al (1978) found that blood was mobile, and could therefore move under gravity, for up to 3 days. Most forensic pathologists would agree that hypostasis was maximal/ fully developed after about 12 hours.

The pattern of hypostasis may provide useful investigative information; if the distribution of hypostasis is on the back of the body, but the body is discovered lying on its front, the body has been moved after a sufficient time has elapsed during which posterior hypostasis has developed and become 'fixed'.

When a body has lain on its front, post mortem hypostasis will devlop on the front of the body. Blood settling in lax soft tissues of the face can cause petechiae, and sometimes larger coalescences of petechiae (vibices or 'Tardieu spots'), perhaps with pallor due to compression around the mouth and nose. In such circumstanes, the pattern of hypostasis may appear sinister, and suggest that compression of the mouth/ nose (suffocation) had occurred. Detailed pathological dissection of the face and neck in such cases will frequently be able to distinguish such scenarios, but pressure to the face/ neck may not always be capable of being excluded.

In relation to postmortem hypostasis ... the settling of the blood in the tissues due to gravity is an even worse indicator of time since death than rigor mortis.

Rigor mortis is a temperature-dependent physiochemical phenomenon that occurs in muscle cells following cessation of a supply of oxygen. Energy production, in the form of adenosine triphosphate (ATP), ceases and lactic acid is produced as a consequence of short-lived anoxic metabolism. Calcium ions diffuse from the extracellular fluid and terminal cisternae into sarcomeres, bind troponins, and cause actin and myosin subunits in the muscle cell to irreversibly bind. The result is a 'stiffened' muscle, which will only become 'falccid' when that muscle breaks down due to decomposition, or is forcibly bent, breaking the bonds between actin and myosin.

When muscle glycogen levels are low, such as following intense exercise, rigor mortis will develop faster.

Rigor develops at the same time throughout the body, but is detected most rapidly in small muscles, such as around the eyes and mouth.

Whilst authors historically ascribed a 'timetable' to the development of rigor, current opinion is that such a timetable is impossible to construct, given the dependence of the process on many variables. On its own, rigor has little utility as a marker of post mortem interval.

Rigor mortis is the best known, though the most uncertain and unreliable postmortem event.

[rigor mortis] is now discarded by all experienced pathologists as anything more than the most approximate of pointers to time of death. [i]t is patently obvious that rigor is next to useless for determining the time since death.

Muscle contraction at the level of the sarcomere

Muscle contraction physiology in life can be reviewed at Wikipedia and Muscle Physiology, and with reference to an animation of actin/ myosin interactions during contraction.


Further animations of muscle function can be viewed here ...

The rate of heat loss of a body is proportional to the difference in temperatures between the body and its surroundings.

This can be expressed by the equation:

See also Wolfram alpha and a demonstrations.wolfram.com/NewtonsLawOfCooling/ of the effect of changing the equation variables

Scientific research has been ongoing for decades (and longer), and of the changes that occur in the early post mortem period, body cooling is perhaps the most 'scientific' of the signs. However, even using complex formulae, and nomograms, the accuracy with which post mortem interval can be calculated is still less than that required for a reliable forensic pathological opinion.

The rate at which a body cools after death depends on the following; 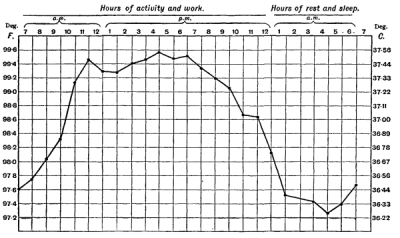 NB. Reproducing this nomogram from sources other than   https://www.rechtsmedizin.uni-bonn.de/dienstleistungen/for_Med/todeszeit   may result in calculation errors due to small differences in the copied nomogram (see Burger et al 2013).

The example model shown, from Digital Meters, has a temperature measuring range of -40oC to 110oC with 0.5oC accuracy)

The difficulty in applying the nomogram is in the estimation of the strength of the variables that must be taken into account, and changes in those variables that may have occurred before discovery of the body.

Estimation of the time since death (3rd Edition 2016)

Buy the new edition of this exploration of methods used in forensic pathology casework to estimate the post mortem interval here, and preview the book on Google Books ... 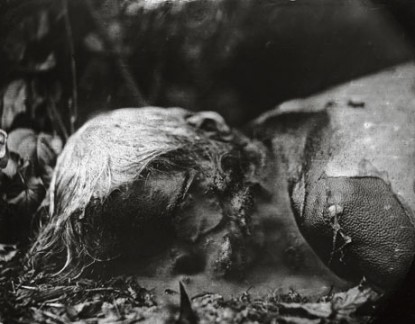 Source: Sally Mann at the Guardian

Dead bodies are eventually broken down into their constituent components.

Decompositional change is important in the forensic context, not only when considering how long an individual has been dead for, but also in the recognition of natural phenomena that do not imply an unnatural death.

Soft tissues degrade and liquify over a period of time, the rate of progress of which is temperature dependent. The warmer the environment in which the body lies, the more rapid the liquifaction occurs.

In temperate climates, the skin of the lower right abdomen (overlying the caecum which contains gut bacteria in abundance) turns green after 3-4 days. Bacteria multiply within the vasculature, and their presence leads to haemolysis and decomposition of the blood within those vessels. This process can be seen as discolouration of the vessels ('marbling'). Skin breaks down, leading to blistering and skin slippage, and bacterial growth in soft tissues, with gaseous formation, leads to 'bloating' of the body. Internal pressures build up, forcing decomposition fluids from the lungs through the mouth and nose ('purge fluid'). This purge fluid is often mis-interpreted as bleeding from injuries by lay people.

Insect and animal depredation increase the rate at which a body decomposes, and hastens the return of the body to skeletal elements, and eventually to no recognisable remains.

No relaible timetable for such changes can be specified, alhtough much recent research by forensic anthropologists (including that carried out at the Anthropological Research Facility at the University of Tennessee) and entomologists has been directed at providing such a timetable.

Dead bodies degrade at different rates depending upon the medium in which they are placed; immersion in water slows the process, whilst burial slows the rate even more. Casper's law traditionally stated that 1 week in air = 2 weeks in water = 8 weeks buried in earth.

Where the environemtal conditions are moist (in earth burial for example), body fats can saponify, leading to adipocere formation. This is a pale waxy substance that becomes brittle over time, and can preserve the outline of a body structure. It can form in as little as 3 weeks, but is usually a process that takes months or years to occur.

Scientific American animation - what happens to your body after you die? 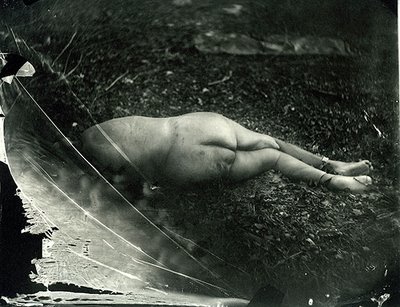 Sally Mann (The art of dying) 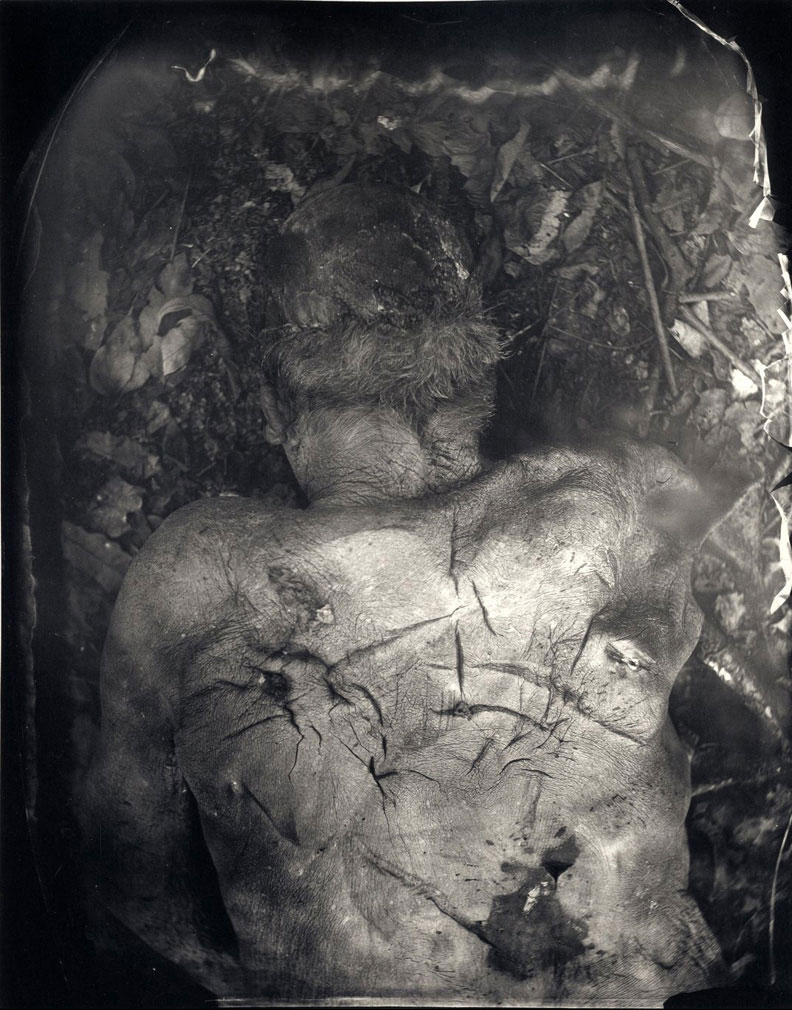 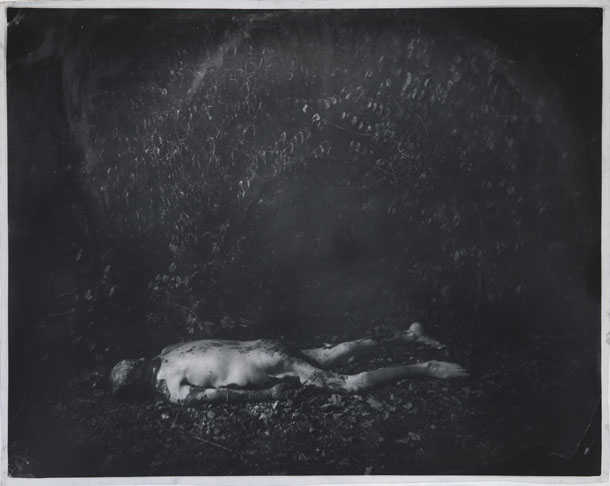 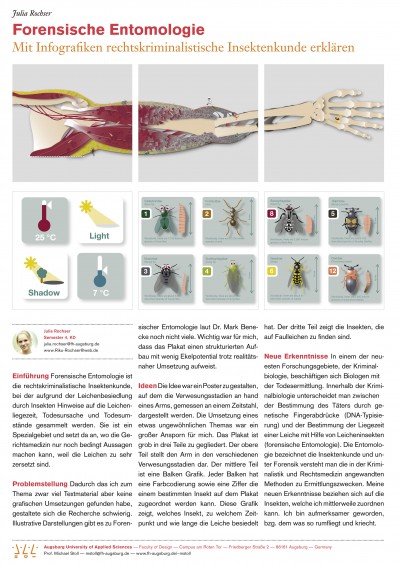 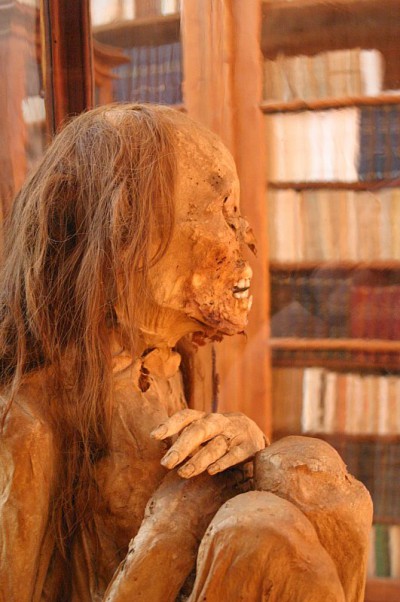 When a body lies in dry conditions it may dessicate instead of putrefying, a process called mummification. Mummified tissues are dry and leathery, and often brown in colour.

Mummification commonly occurs in warm and hot climates, such as in the desert, but if the micro-environment is dry enough, it can occur anywhere in the world. Newborn infant bodies, which are relatively sterile, frequently are found mummified in attics, for example, and mummification of finger tips and noses etc can often be seen in adult bodies at the same time as liquifactive decomposition.

Skeletalisation of remains in a mass grave

The loss of soft tissues results in skeletalisation, the rapidity of which is dependent upon the climate, the micro-environment and insect/ animal predation. It may take years for a body to become skeltalised when buried, but weeks (or less) in warm climates where the body has been exposed to predation.

Dating bones is fraught with difficulties, but may be achieved through a combination of visual assessment, Carbon dating or mineral analysis. 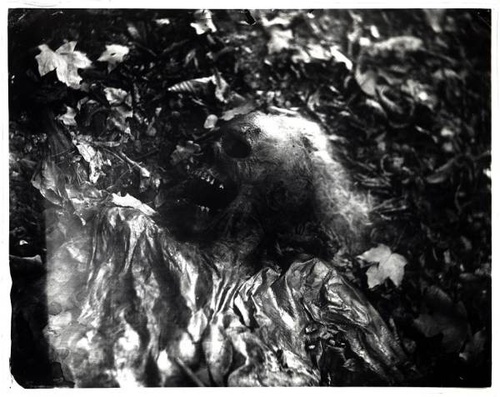 Sally Mann (Untitled 4 from What Remains) 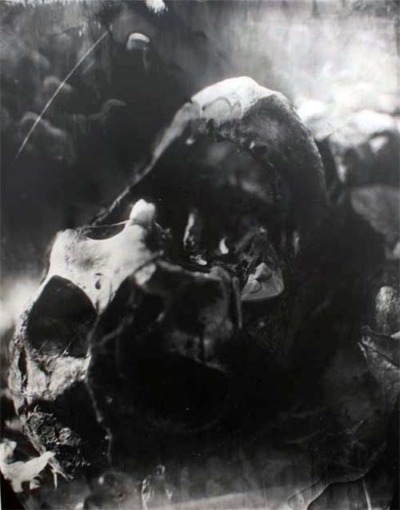 Sally Mann (from What Remains)

determination of the post mortem interval - is it possible?

'Determination of death time by the pathologist is seldom useful as evidence in criminal procedings because of the non-predictability of the rate of post mortem changes, the lack of reproducible standards allowing correlation between post mortem interval and a post mortem change, and a wide variation in opinions when confronted with the same facts. It is a subjective opinion and little weight should be placed on it'

Any determination of the post mortem interval, based on an examination of the body, must necessarily be made with extreme caution, and requires the pathologist to assess the overall appearance of changes to the body in order to give an overall assessment of the likely timeframe involved. However, due to the numerous variables involved, such a pathological opinion is an approximation of the likely time since death, and the only valid opinion that can realistically be given is that an individual died at some time between that time when they were last seen alive (by a relaible, disinterested witness) and the time when their body was discovered. 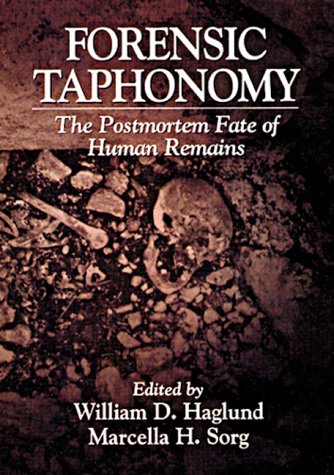 See inside this book at Google Books ... 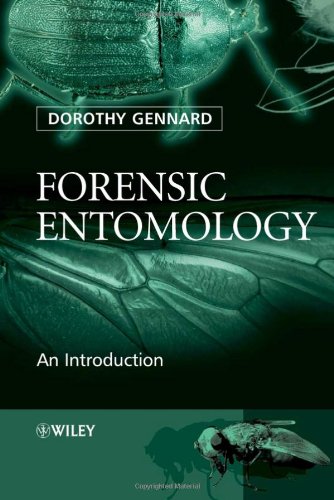 See it at Google Books here

The French physician and chemist, P.H. Nysten published the first scientific secription of rigor mortis. The 'law' named after him stated:

This apparent descending, progressive, involvement of muscles has been questioned in modern times, and it is thought that the apparent progression represents the simultaneous development of rigor mortis affecting muscles of varying bulk, such that those smaller muscle groups (such as in the face) appear to stiffen more rapidly than those with a larger bulk (such as in the thighs).