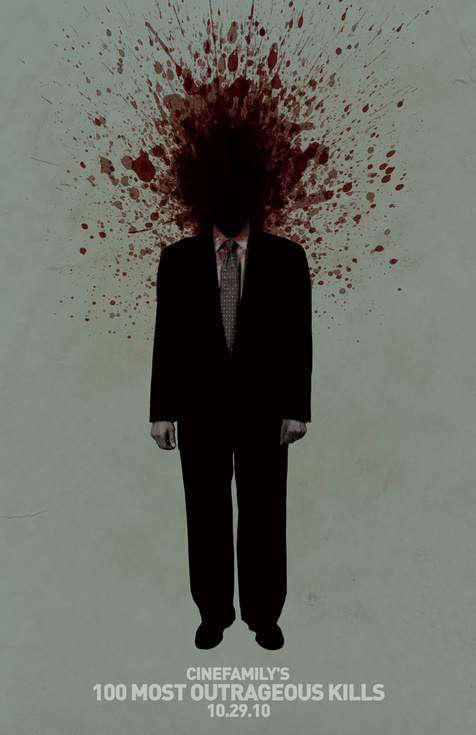 Wounds created by shotguns are much larger than those created by handguns, and vary from massive disruption of the skull and its contents during a contact discharge to the head, or to a widespread pattern of pellet holes when fired at a distance. This section will describe the patterns of wounds seen at various ranges of fire, first described by Breitennecker in 1969 (pp.261-268).

When a shotgun is discharged into the head during a contact (loose or hard) or close range shot (up to about 15-30 cm or 6-12 inches), the pellets contained in the cartridge have not had time to spread, and they enter the body as a single mass.

Where the barrel of the shotgun is in hard contact with the head, a large volume of gas also enters the cranium - the effect of which is one of massive destruction.

The explosive effect disrupts the cranium and its contents, so that pieces of skull and brain tissue are spread over a wide area. Determining the point of contact requires meticulous gathering of skull fragments and attempting to reconstruct the skull and head, in order to find a hole, which will usually be heavily soot stained (Dana and Di Maio 2003; Di Maio 1999).

The process of ejecting the mass of shot from the barrel results in production of ‘secondary projectiles’ – these include components of the cartridge such as  wadding and metal fragments from the cartridge case/ base, as well as flame, carbon deposits, soot, unburnt powder and combustion gases.

The severity of the effects depend to some extent on the gauge of the weapon – 12 gauge being more destructive than 20 gauge due to relative differences in gas volume produced at discharge.

In forensic practice, most such contact or close range shotgun wounds to the head are suicidal in nature. Favourite suicidal sites of election are the roof of the mouth, the temple and under the chin. Where the entry point is the roof of the mouth the escaping gas volume causes overstretching of the skin, and this causes splitting and tearing of the tissues around the mouth, nostrils and eyes (Di Maio 1999).

Where the entry point can be reconstructed, wounds are often approximately 2-4 cm in diameter (approximately the diameter of the barrel), with heat-seared edges and a marginal abrasion.

shotgun wounds to other body parts

Contact or close range wounds to the thorax or abdomen tend to produce similar wounds to those made by handguns, albeit on a larger scale (Dana and Di Maio 2003; Di Maio 1999).

However, handguns tend to have more features at the muzzle end, such as the sites, and the imprint left by a shotgun contact wound may just be the rounded barrel in a single barrel weapon, or occasionally the outline of the second barrel in a ‘double barrelled’ shotgun.

Loose contact and close range shotgun wounds usually demonstrate features of skin searing and or blackening and the cherry-red discolouration of carbon monoxide uptake in the subcutaneous tissue within the wound track (forming carboxyhaemoglobin/ carboxymyoglobin).

As the range of fire increases to approximately 30cm to 1.2 metres, the presence of secondary projectile damage is reduced (Cassidy 2000).

In addition, soot marking tails off with increasing distance (20 – 40 cm), and the diameter of black staining reduces with increasing range of fire until it is absent (at about 40 cm).

Powder tattooing similarly tails off with increasing range of fire and is not usually seen beyond 1 metre.

As the column of pellets exiting the shotgun begin to spread due to the effect of air resistance, the wounds produced range from a large central hole, to one that has ‘scalloped’ edges. This is the result of some peripheral pellets being slightly separated from the main mass hitting the skin at the edges of the wound created by the central pellet mass. Up to approximately 1 metre, central wounds are still in the region of 2.5 – 4cm in diameter, but then start to become scalloped (Cassidy 2000).

With increasing range of fire, this scalloping will become more prominent, until the central mass has diverged enough to give rise to a smaller central defect (the size of which will depend upon the gauge of the weapon and the amount of degree of ‘choke’), but with a cuff of satellite pellet holes, and eventually a widespread pattern of individual pellet holes with no discernable central hole.

The central mass of shotgun pellets tend to ‘break up’ at about the 2 m mark, but this will depend upon the characteristics of the weapon involved – for example the gauge, barrel length, type of ammunition used, amount of choke etc.

At a range beyond approximately 2 m there will be no soot staining or burning, and no powder tattooing.

The shotgun cartridge ‘wad’ initially travels with the central pellet mass, and in contact wounds, it will be found within the wound track. Beyond 1.5-1.8 metres, the wad may not follow the pellet mass, and consequently strikes the body separately, giving rise to a separate area of abraded skin (Dana and Di Maio 2003).

In order to evaluate the estimated range of fire, detailed measurements are needed for the central hole, the area and pattern of satellite pellet holes, the presence or absence of soot, powder tattooing and wad abrasions.

This information can then be used by forensic ballistics experts to carry out range of fire tests to determine whether a suspect weapon and ammunition was responsible for this particular pattern, and at what distance the discharge was likely to have occurred at. The presence of injuries or features associated with secondary projectiles is inversely related to the range of fire.

Shotgun wounds created at a distance can be deduced by the widespread pattern of pellet wounds (small circular defects with abraded rims), and the complete lack of soot staining and powder tattooing (or other secondary projectile damage).

Central defects are not normally seen by approximately 3 m. The wad will usually fall to the ground beyond approximately 2m (Cassidy 2000; Di Maio 1999).

Where the shot mass strikes an intermediate target, such as a glazed door etc, the pattern of shot dispersed will vary considerably, and great care should be taken when documenting shotgun pellet patterns if nothing is known about the circumstances of the wounding or evidence found at the scene of the shooting.

The effective range for shotguns is approximately 50 m, but the severity of wounds caused by these weapons rapidly diminishes with increasing range of fire, such that the mortality rate reduces to a few percent where the range is over 11 m, whilst closer range discharges (<5 m) give rise to a mortality rate of 85-90% (Cassidy 2000).

Unlike exit wounds created by rifled weapons, shotguns do not generally give rise to exit wounds unless there is a contact wound to the head, for example (where the exit wound is actually a reflection of the explosive effect of the gases expanding in the enclosed cranial vault), or where there is a ‘through-and-through’ wound to a limb at close range. Head wounds demonstrate ragged and irregular exit defects due to fragmentation of cranial contents with everted edges.

When attempting to determine from which direction a shotgun wound was inflicted from, one may look carefully at the wound margins to see if there is any undermining – and the pattern of soot soiling and powder tattooing may help to distinguish angles of fire. However, as range of fire increases, this will be increasingly difficult, and the striking of intermediate targets, or attempts by the victim to protect vital organs against a shot may result in distorted wound and shot spread patterns making such reconstructions difficult.

The ability of a victim to survive a shotgun wound depends upon the range of fire. Contact or close range injuries usually result in massive destruction, and clearly wounds involving the head or thorax result in instantaneous or rapid death. However, as the range of fire increases, depending upon the part(s) of the body injured, the capacity exists for increased survival and post-injury activity (Spitz 1993).

Readers in the UK will be familiar with the term ‘rubber bullets’, due to their use during the Northern Ireland ‘troubles’, mainly at the end of the last Century. Elsewhere in the world, they are used in riot control.

Originally referring to cylindrical ammunition made from slightly flexible rubber and fired from a shotgun at a muzzle velocity in the region of 70 m/s, these rounds were used in the 1970’s but were found to give rise to an unacceptably high rate of serious injuries, and the death rate was said to be 1/4000 rounds fired, compared to 1/18000 rounds of the newer ammunition (Knight 1996 pp.269-270).

More recently a Teflon/ PVC round was used which was fired at lower limbs at a distance of 20-40 m. These rounds, weighing 135g (similar to a cricket ball) had greater stability during flight, and were therefore more accurate. In a similar way to shotgun pellets, these rounds transmit all of their energy to the target on impact, and are designed to cause pain and bruising in order to give rioters a disincentive to continue throwing ‘Molotov cocktails’ and stones etc.

Air weapons have a low muzzle velocity, and consequently give rise to fairly minor injuries such as bruising and abrasions. Cassidy (2000) refers to experiments carried out in the early 1980’s by DiMaio (1999) which found that the maximum air gun muzzle velocity of 80-105 m/s approaches the minimum found to actually perforate skin (75-101 m/s), and the striking velocity is less than the muzzle velocity in any case. She concludes that these weapons are usually harmless beyond a range of 100m unless the weapon has been modified in some way.

Where the airgun pellet enters the orbit, however, more serious injury or even death can occur, and children accidentally discharging these weapons may lose an eye or even die from brain injury if the pellet perforates the fragile orbital plates.