3D rendered data of extradural haemorrhage from the above case

3D rendered data from same case as above

skull fracture related to the extradural haemorrhage in above image

3D rendered view of the same parietal skull fracture (all of the above images from Radiopedia.org case 6080 Dr Frank Gaillard)

Extradural haemorrhages are seen in approximately 10% of severely head-injured patients, 80% of which are associated with skull fractures.

These haemorrhages usually occur due to damage to the middle meningeal artery, and high-pressure arterial blood ‘strips off’ the closely applied dura from the under-surface of the skull.

Saukko and Knight (Knight's Forensic Pathology, Arnold Publishers 2004) note that a minimum of 35 mls of blood are required before clinical signs develop, although 100 mls are more likely to be associated with fatalities.

Clinically there is often a ‘latent’ or ‘lucid’ interval (thought to be approximately 4 hours) between the traumatic event and subsequent reduction in the level of consciousness.

Subdural haemorrhages occur more frequently than EDHs (approximately 18% of fatal head injuries) and are less likely to be associated with skull fracture. (Saukko and Knight 2004).

SDHs may be preceded by head injury, but often there is no history of trauma (or only a very ‘trivial’ event). Those at the extremes of life, and chronic alcoholics, are at greatest risk of developing SDHs due to the anatomy of the subdural space, cerebral atrophy and an increased propensity for falls etc. SDHs may be ‘acute’, ‘sub-acute’ or ‘chronic’.

Bleeding originates from torn bridging (‘communicating’) veins crossing the subdural space from the cerebral cortex to the dural sinuses, and is thought to be due to rotational and/or ‘shear’ strains which are often a result of impact. However, impact may not be necessary and subdural haemorrhages are frequently encountered in infants who have allegedly been ‘shaken’.

Clinically apparent SDHs usually involve volumes of between 35 and 100 mls, by which time they act as an ‘irritant’ or space occupying lesion. (Saukko and Knight 2004).

Chronic SDHs, which show a yellow/brown ‘membrane’ on the under-surface of the dura, may be an incidental finding in the elderly, the effects of which may have been confused clinically with dementia or a stroke.

Munro and Merritt (1936) described the macroscopic and microscopic appearance of SDHs, from which is derived a means by which SDHs can be ‘aged’ microscopically. However, microscopy is not accurate, and is highly dependent on: the site of sampling, ‘re-bleeding’ into established SDHs, individual variations in healing etc.

Some experts advocate a more pragmatic approach to the 'ageing' of SDHs by dividing them into 'acute', 'sub-acute' and 'chronic' categories. 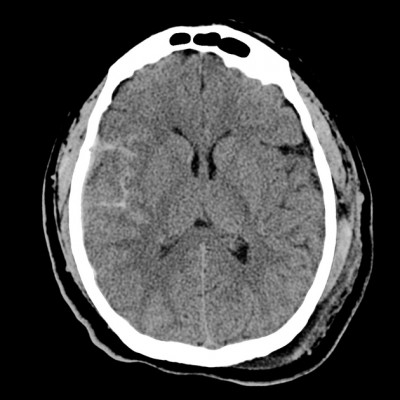 Subarachnoid haemorrhage  is more common than SDH, and frequently occurs as a result of natural disease – the rupture of a ‘berry aneurysm’, for example.

Trauma resulting in cerebral contusion or laceration will also lead to damage of blood vessels beneath the arachnoid.

‘Traumatic SAH’ is characterised by bleeding around the brainstem and in the posterior cranial fossa, arising from the (usually) intra-cranial part of a vertebral artery or the basilar artery. Such cases of SAH usually involve young men who have been drinking alcohol and who are subsequently involved in an altercation, leading to them being struck on the side of the head, resulting in a rapid complex rotation, tilting and flexion/ extension movement of the head. The demonstration of a vertebral artery tear (either macroscopically or microscopically) may not always be possible. (Saukko and Knight 2004).

Death from SAH may be instantaneous, particularly when there is haemorrhage around the brainstem. The mechanism of death is not completely understood, but may relate to 'irritation' of vessels resulting in vasospasm, and compromise of vital centres. 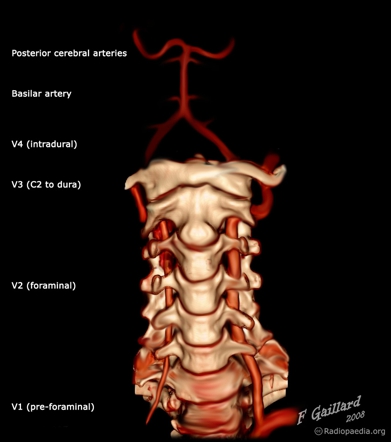 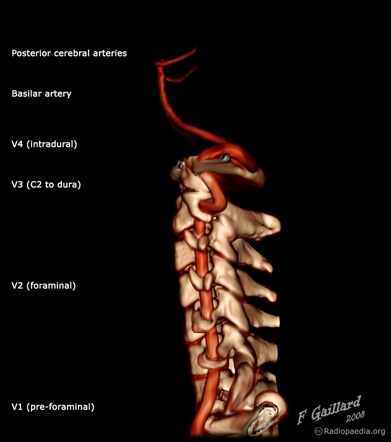 anatomy of the vertebral artery

Test yourself on the anatomy of the meninges by labelling the diagram here ...