Four forms of diffuse brain injury may be seen as a consequence of head trauma:

Neurones are selectively vulnerable to the effects of hypoxia/ ischaemia - those most vulnerable being those in the CA1 region of the hippocampi, the cerebellar Purkinje cells and those in layers 3,5 and 6 of the cortex.

The cytoplasm of ischaemic neurones can be a red colour, and the nucleus is generally shrunken and pyknotic. Changes appear within 4-6 hours post-insult, but can be difficult to differentiate from artefact. Vacuolation of the background neuropil may be of assistance in diagnosing hypoxic/ ischaemic encephalopathy.

This entity consists of multiple small haemorrhages throughout the brain, and is virtually confined to those dying within 24 hours of head injury.

TAI is a microscopic diagnosis, but can be inferred by the existence of morphological 'markers':

The mechanism of TAI appears to be shearing forces causing either a primary axotomy (immediate disruption of the axon) or secondary/ delayed axotomy a few hours after the traumatic insult.

Axonal damage is identified by conventional microscopy after approximately 12-24 hours, in the form of axonal swellings or varicosities (optimally visualised by silver stains, but visible as eosinophilic swellings on H&E).

More recently, it has been recognised that ß-amyloid precursor protein (APP) - a uniquitous membraneglycoprotein produced in the cell body and transported by fast anterograde axoplasmic flow - accumulates at the site of axonal damage, and can be identified by immunohistochemistry.

APP positivity highlights axonal damage, but it is not specific to traumatic damage - axons damaged by hypoxia/ ischaemia have also been shown to be positive, and although it is sometimes claimed that a distinction can be made between the 2 modes of axonal injury - based on the pattern of staining - this is not always a straight-forward matter. 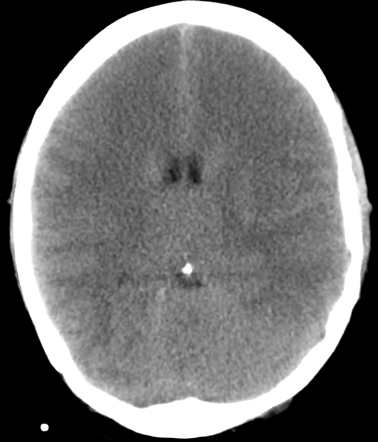 cerebral oedema after a drugs overdose (from Radiopedia.org)

Brain swelling due to the development of cerebral oedema is a common sequelae of head injury, and leads to raised intra-cranial pressure (normally less than 20 mmHg; >60 mmHg being fatal).

Oedema mainly affects the white matter, resulting in flattening of the gyri against a tense and bulging dura.

Swelling forces the brain against the rigid reflections of the dura within the skull, leading to 'herniation',